If you're related to me and you're a woman you can pretty much expect to get a scarf for Christmas. Last year it was cobweb felt scarves. This year I decided to buy some silk scarf blanks and have some shibori fun. It's too bad I had to give these away...... I would have kept and worn all of them. 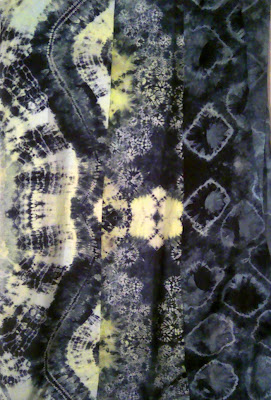 On the left I folded the scarf in half for an end-to end symmetry, then stitched  a running stitch along a pinched undulating fold up the length, and dyed it in a low-immersion bath with lemon yellow and cerulean. Then I gathered the remaining fabric into a handful and bound a few rubber bands around the bundle and overdyed it in jet-black, leaving a bit of yellow tip untouched. The middle scarf was also folded in half, then stitched through both layers with a running stitch in a meandering wave/spiral pattern. It was dyed the same way as the first, including the rubber bands and black overdye. Jet-black comes out a dull navy if it isn't too strong. 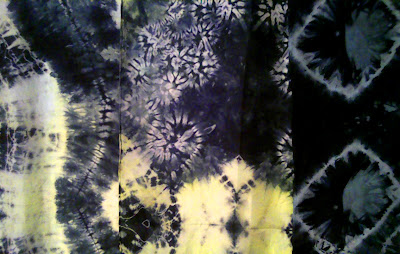 The third piece on the right side above was first bound to make a large tie-dyed circle at each end of the scarf and dyed cerulean, but the bath was too weak or not long enough and nothing came out. So I bound a few ping-pong balls with rubber bands into the silk and  overdyed jet-black. Since the ping-pongs float, there's an interesting gradation light/dark for each side of the ball since half of it floated above water and half was submerged. 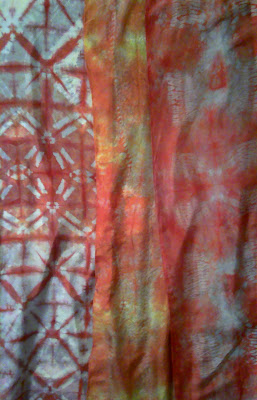 Then there's the warm trio. The left was folded in half, then in thirds, then in triangles up the length of the scarf and clamped with one large alligator clip in the center of the triangle bundle, and 2 smaller clips on the corners. I LOVE how that one came out. Clamp dyeing is fun as I can combine my love for shibori with my love for origami. The center piece was folded in half, then thirds, and an undulating line was stitched "makinui" style on the fold for the chevron effect, then scrunched in a jar and low-immersion dyed with burgundy and yellow for the mottled effect. The right piece uses my favorite shibori pattern- "mokume" or woodgrain. I folded the scarf in half and half and half again, then I stitched two squares in rows of running stitch back and forth. Everything was gathered tightly, like in all these techniques, then dyed in burgundy and just a little yellow. I like how the burgundy MX dye travels into the fabric, changing color slightly as it goes. 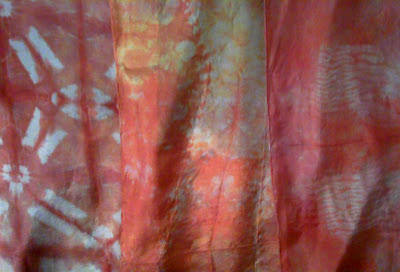 I still have that last one. Shall I keep it? I have one more gift to give, but I don't think these colors would be good for the recipient. And I bought twice the number of scarf blanks than I needed, so I could play some more. Any favorites out there? Which pattern should I do for this last cadeau? (cadeau=gift in French if you weren't familiar).
Posted by MarieE at 12:56 AM