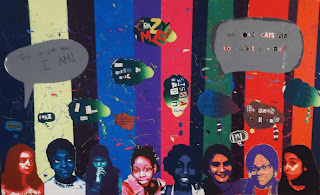 Classes have been over for over a week, but I forgot to get pictures of this final piece my kids made in the hectic rush of the last day. This was the best semester ever with my Silkscreen for 11-13 year olds! I had a group of 8 charming and mature young ladies who worked quietly and diligently the whole time. Our 2 main projects included a printed word bubble, which the students then collaged with magazine letters, and a 3-layer self-portrait stressing value changes in color. 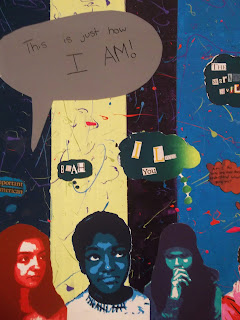 For the last class I got a 4x6 foot plywood board, which the students painted with stripes and spatters (they wanted it "rainbow", but I think we went more "circus"). For such a quiet group of kids, they must have incredible inner lives to produce this vibrant work of collaborative art. With the background painted we cut out our bubbles and self-portraits, and collaged them on top. 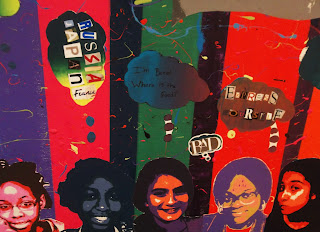 Their "thought bubbles" include phrases like:
"crazy me"
"this is just how I am"
"Express yourself"
"Am I the only one who doesn't know what's going on?"
and of course, "How can cats be so sute but so evil?" 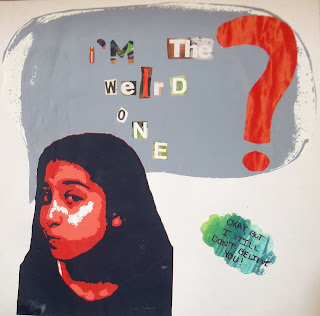 Students also had an opportunity to make their own portrait/bubble collage using other prints in their edition. 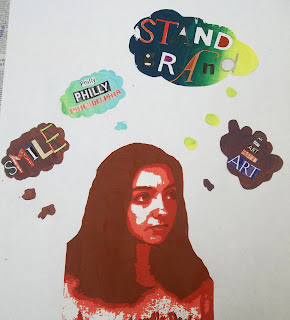 I'm really going to miss this bunch of girls. This summer the age group for silkscreen is shifting to 12-16 for camp, and in the Fall I'll have 14-18 year olds for the first time. It will be nice to get more experience with teens, but I really like working with the middle schoolers. Working in the silkscreen studio requires respect, cooperation, and responsibility, and I think my students really grow through the process.
The finished "Thought Bubbles" collaboration is going to be on display in an exhibition of children's artwork at the Philadelphia Foundation this Fall!
Posted by MarieE at 12:31 AM No comments: 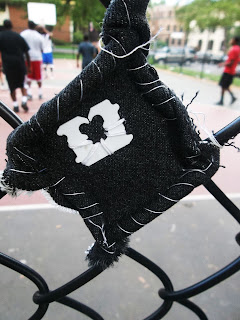 Last month I met up with some art ed friends for a picnic in Clark Park in West Philly, and my co-conspirator, Johanna Marshall, and I recruited them into our stitchbombing mischief. We gathered some interesting objects from the park- amidst the usual glass and bottle caps were bread bag clips, plastic barrettes, broken plastic forks, shattered toys, and lonely playing cards. I tried to demonstrate Shisha stitch, but many of our objects had bizarre shapes that did not lend themselves to shisha. So, instructed to attach their object to fabric however possible, we ended up with 10 more patches for our stitchbombing adventure. 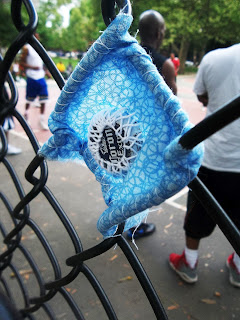 Our "Trail Blaze" project started last Fall along the Schuylkill River trail, where our diamond formation of "evil eye" shisha stitched debris apparently remains to this day. We intend to tag places that may be unsafe and to make viewers more aware of their environment. Since our objects this time were culled from Clark Park, Johanna and I returned there today to tag our pieces on a fence. The park does not seem dangerous to me- at least during daylight hours, but perhaps the activity in the park lulls one into a false sense of security. 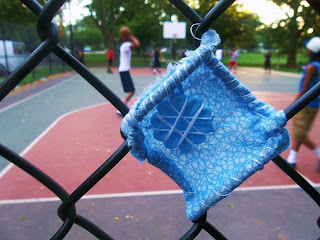 When we arrived at our pre-determined fence tonight we found a full-on basketball game on the court it encircled. We felt a little hesitant coming into this very masculine space to stitch. This is the first time I've stitch-bombed so out in the open with so many people around. We decided to stick together, but spread out our tags along both ends of the court, unlike our first effort which placed about 20 patches into a tight diamond formation. Our hesitancy was unnecessary- once started I fell into the private zone of stitching and was completely unself-conscious about all the players and spectators. They seemed unphased as well- probably because West Philly is full to the brim with artists doing crazy things all the time. 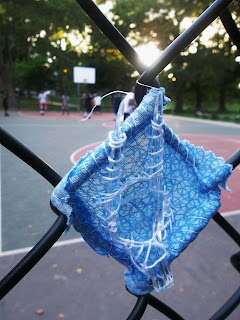 At one point I had to disturb 2 guys who were chatting on the sidelines and leaning on the fence, but we ended up having a great conversation and they came around to check out all the found objects on the tags. At another moment, just as a young adolescent came near to chase an errant ball I dropped my needle on the wrong side of the fence- he asked what we were doing, I explained, and he helped me find my needle. The objects weren't visible from his side of the fence, and he asked "is that one a Corona bottle cap too?", which told me that he'd already gone and inspected the other objects. I felt very satisfied that we'd piqued this kid's curiosity and made him take note of his environment in a small way- mission accomplished. 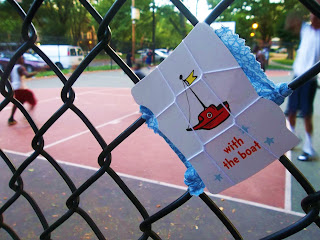 I love all these shots with the players in the background. I wonder how long these will last. On the one hand, many of the objects will not endure this much more exposed environment (our last one was under a bridge-protected from the sun and rain). On another, this is a much more public space and curious fingers may pry them away. Who knows? Go check them out: basketball court fence in Clark Park on the 600 block of 43rd st. 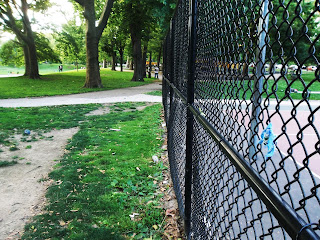 Our adventure ended with a mist of rain, and a beautiful rainbow in the sky. It was good.
Posted by MarieE at 2:00 AM 2 comments: 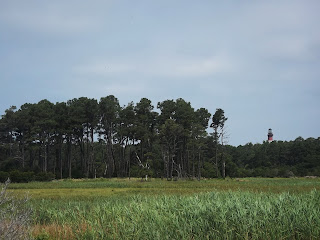 I've just had a lovely week with the family down in Chincoteague, Virginia. We rented a cottage, cooked our own meals, went to the beach every day, and enjoyed the wildlife. Chincoteague National Wildlife refuge is beautiful, and full of so many snowy egrets and herons that we barely noticed the wild ponies. I didn't see or make much art- just did sketches and stitched a little on my wrapping cloth.  It was a vacation from everything. 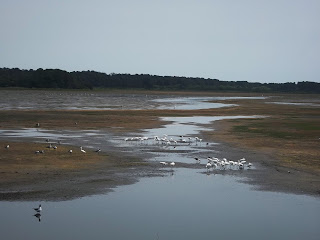 Labels: news and notes
Newer Posts Older Posts Home
Subscribe to: Posts (Atom)
This blog will be an effort to document my thoughts and experiences in studio work, art criticism, and community education in the areas of fibers, color theory, screenprinting, and art education. Please respect my work and link back to me if you use any images and feel free to comment. I am a fiber artist from Philadelphia, teaching at Fleisher Art Memorial, and have recently completed my Masters of Art Education at Tyler School of Art, Temple University.