Last Winter I had my Stitch and Surface students do a sashiko project (a Japanese patterned quilting/mending tradition). As a sample piece I had done a little piece of black thread on white cotton sandwiched with a black calico and had stitched an intersecting key pattern onto it. So it's been sitting in my sewing bag all year waiting for inspiration. At first I thought I'd make a whole bunch with different patterns and then sash them together as a quilt, but who am I kidding! 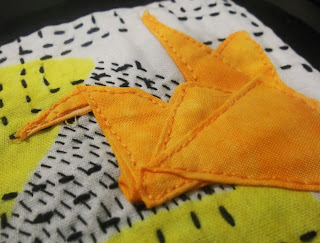 I haven't taken down the garland of paper cranes we made for Christmas yet- they're not Christmasy and they brighten up the winter doldrums- and as I stared at it I wondered if I could make an origami crane out of fabric. A scrap of orange and an iron later, I had a slightly floppy fabric crane and a sudden inspiration for that sashiko piece. 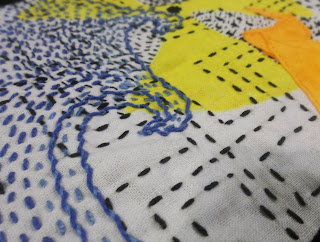 Every once in a while I make a little "thinking cloth" to get ideas out of my head. I heard this week that we're receiving a ton of radiation due to massive solar flare activity. With the word  "radiation" in my head and these Japanese-style elements in my hands I started to think back to the tsunami and nuclear meltdown in Fukushima last March. I wonder how things are in Japan nearly a year later... 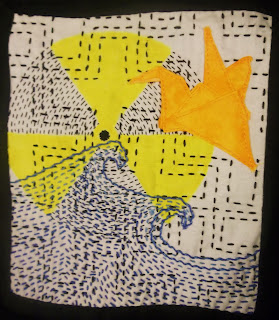 The black areas of the radiation symbol are stitched in black running stitch, and the yellow areas are colored in with fabric marker. Then blue waves were added in, inspired by the warning symbol for tsunamis, and with a slight reference to "the Great Wave" by Hokusai. Two of the lines were whipped to make the edge stand out more.The orange crane was added last with a backstitch around the perimeter of each folded area, flattening it out. Finally the whole thing was bound in black double fold bias tape- my latest favorite finishing technique.
This piece might end up in my solo show with other "thinking cloths". What I love about it is how simple running stitch can work.

I've had a really relaxing Candlemas Sunday- stitching all morning, a gorgeous choral service at the Cathedral, and some good home cooking tonight. It certainly recharged my batteries for the coming week.
Posted by MarieE at 8:56 PM