Thought I'd share the results of my Art History presentation I made yesterday morning. I researched the arc of American embroidery from the 17th century colonial period, through the Federal Period "Golden Age", and concluded with some contemporary work. My thesis in the presentation was that Embroidery is an art of appropriation, and therefore reflects the culture and art of its period. I supported the idea by finding print media and artwork for comparisons. 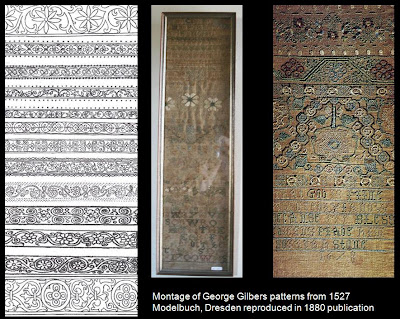 Here is the Elizabeth Hudson of 1700 sampler I've shown you before from the Haddonfield Historical Society and the Sarah Stone 1678 sampler juxtaposed with a series of band patterns from the Gilbers 1527 Modelbuch I composed together as a band sampler. As soon as there is widespread printing of books there is dissemination of embroidery patterns! 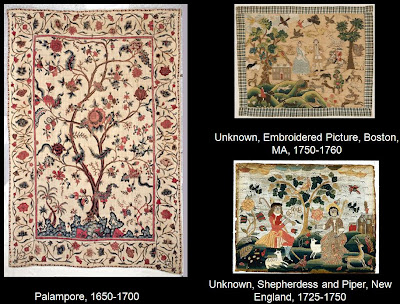 These two embroidered pastoral scenes from New England show the "clip art" style of composition. I found engraving shop catalogues from the 18th century that listed "Children's lottery prints" with images of animals, ladies and gentleman, and assorted "droll subjects" which I believe would have been selected for embroidery compositions. I also believe that the foliage in the trees and the landscape style were influenced by the Indian Palampores, which would have been imported in Europe and the colonies and used as bedhangings. 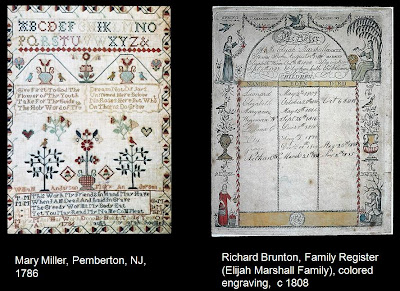 The American sampler moved from narrow bands of patterns to a more "painting-like" rectangular format with the bands becoming a decorative frame, and started to include more text. Instead of just an alphabet and the maker's name and age, the samplers started to include religious phrases and quotations as well as family registers listing the births and deaths of the stitcher's family members. I discovered a printed version of a family register by Brunton in 1808 which I believe appropriates the compositional characteristics of samplers that set the tradition. Moving into the Federal period, samplers become far more pictorial- graphic, decorative frames shift to more floral and representational imagery. Embroiders start looking more specifically at fine art for inspiration, and so Embroidered paintings become more sophisticated. 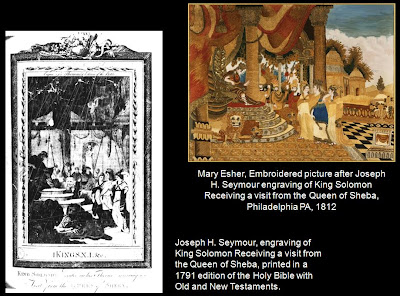 This embroidered painting by Mary Esher is the only embroidery for which I found a specific reference, and that was to a Seymour engraving published in a 1791 edition of the Holy bible. Materials in this period shift from cotton and wool to fine silks. Text in sampler work nearly disappears, save for the maker's name. Unfortunately, the Civil war, the industrial revolution, and increased formal public education opportunities for girls meant that schoolgirls no longer made samplers and handwork no longer held the same high value. While Ladies magazines and pattern books abound between the end of the 19th century and continue through the 20th century, there does not seem to be a great deal of embroidered "masterpieces". Perhaps this is due to the more decorative application of embroidery in this period. 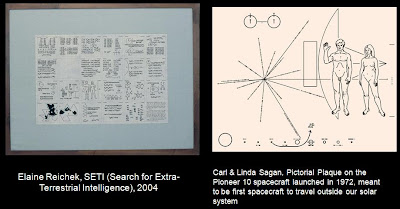 However, the Feminist and Craft movements of the 60's and 70's brought renewed interest in textiles to the attention of artists. Fine artists look back on the traditions and continue the language of appropriation. Contemporary artists (like Elaine Reichek above) appropriate the visual language of historical samplers, quote various sources of information, refer to other artists and artforms into embroidered translations, and appropriate vintage textiles and the work of past needleworkers for new purposes. DIY embroiderers also carry on the handwork traditions in the decorative vein.

So over the arc of American embroidery, the craft moves from the hands of young girls as a method of education into the hands of women (and ok, some men, too) as a way of preserving traditions and making a feminist statement. Throughout the entire history of American embroidery, makers have always looked to other sources for inspiration and their work becomes a reflection of the times. I concluded my presentation with the burgeoning internet community for embroiderers, which allows for even more appropriation and dissemination of patterns, images, and ideas.