I've been invited to participate in an exhibit next Fall at City Hall that will include work that focuses on the historic houses of Fairmount Park. This is not the first time I've used a historic house as inspiration. Last year I had the honor of exhibiting an installation at The Physick House Museum in Society Hill with Landmarks Contemproary Projects. In preparing for that exhibit I did a lot of research on the house and the historic events surrrounding it and its inhabitants before creating the work. Check out the review on Artblog for the results: http://theartblog.org/2008/03/a-fab-fiber-four-the-first-stitch/

So today I went out to Woodford Mansion to take a tour of the house and get inspired. The mansion was built by William Coleman in 1756 as a one-story, 3 rooms + basement country house. Coleman was a friend and investor of Benjamin Franklin's prior to the revolution. The house changed hands and in 1771 David Franks, a wealthy loyalist triangle-trade merchant, built a second story and added a back wing for upper ballroom, grand staircase, and kitchen. After the Revolution, in 1793 Isaac Wharton became the owner, and the house stayed in the family until 1868 when the Fairmount Park Commission was formed and started buying up riverfront property in an effort to preserve Philadelphia's water resources. The house now holds the Naomi Wood collection of antiques, and each room in the house is set up to display items that reflect the various time periods and styles of its 3 main owners. Check out the website: http://www.woodfordmansion.org/index.php 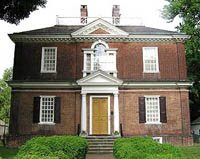 The tour guide seemed to stress the English loyalist aspect of the house, calling Franklin a turncoat, and nearly taking offense when I called Franks a Tory! He also emphasized how the architecture of the house illustrates class divisions- the servant quarters and areas are all on a lower level than the family living quarters. I'm intrigued by all the dichotomies involved: loyalist ve Revolutionary, upper class vs lower class, country vs city life, etc. I have about 2 months to create something. I'll keep you posted.
Posted by MarieE at 4:24 PM