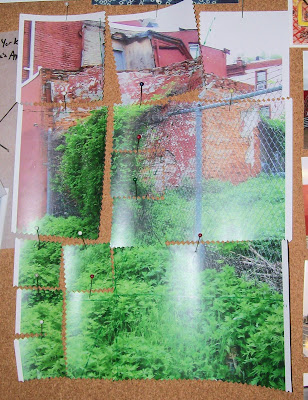 The photo shown before has been enlarged. After living with it for several days I decided to go back to the maps/components ideas, where the larger image is broken up into smaller sections and the divisions are representative of a street map. This site is on Trenton Ave just north of the York/Frankford intersection. Since Trenton Ave cuts diagonally, I used smaller squares moving across the composition from lower left to upper right. Now the main vertical is Frankford Ave, the lower horizontal is York, and the upper horizontal is Hagert. If these street names aren't familiar, they are all part of the border line between Fishtown and Kensington in Philadelphia.

I stopped by the site again today to collect some leaves, as I thought it would be interesting to incorporate a motif or object from the place I was trying to interpret. The spiky leaved plants in the foreground are now nearly waist high. The photo was taken about a month ago. This is what fascinates me-- that despite all our concrete and brick, nature completely takes over here. It's incredibly fecund. I battle all summer with Virginia Creeper and Morning Glory vines.

Since I'm still not quite ready to jump into fabric, I started a watercolor version. I'll wait till all 4 panels are complete before posting it. So here's a similar format drawing I did this week showing different kinds of graffiti. The left side shows a shot from Oxford and Germantown, where the graffiti has earned the title of "mural". I think the owner of the walled lot there must encourage it- not sure if they go so far as to commission it. The right hand image is a scrawl on a warehouse building near York and Almond. I'm enjoying the drawings. They are so much faster than embroidery! I'm calling them drawings rather than paintings, since they combine watercolor and watercolor pencil. 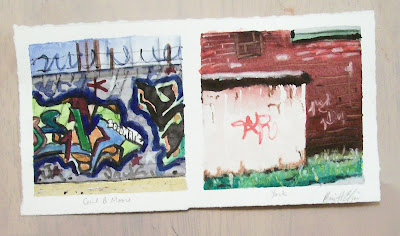