The globe is almost complete. I had a lucky find of a copper pipe exactly the right diameter to fit into my globe stand, just had to hack saw it down to the right length. I added just a few more french knots to represent some previously unrepresented areas (Thank you whoever found my blog today in Vietnam, India, Israel, and Mauritius!) 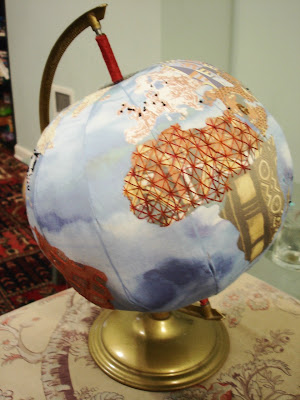 I started stuffing with polyfil, and of course... as usual... I run out when I only had the last little wedge to fill in!! GRRRRRRR! Good thing this isn't due tomorrow. I attempted opening up an old pillow to use the stuffing, but it was too lumpy and felt awful. 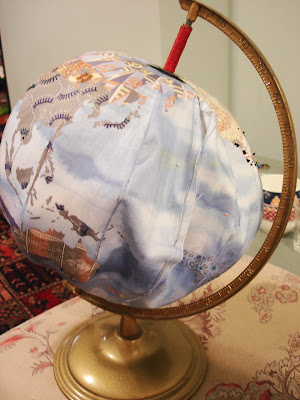 C'est la vie. I'll go buy some tomorrow. Then I have to figure out how to keep it centered on the axis- gravity keeps pulling it down, but the pipe doesn't spin on the stand prongs, so I have to allow for spin of the sphere on the pipe. Wish I had some air-dry clay- I could make a little flange.
Posted by MarieE at 12:59 AM