I said earlier that working felt good. I'm lucky to have a job I love, and no matter what's going on in life or in the world it's hard to stay sad or mad when being creative with kids. I had morning and afternoon workshops at Fleisher summer camp last week, and both classes were TOTALLY full! This is the 3rd or 4th summer I've taught "Critter Softies" but never to such a large group before. Sixteen kids ages 7-10 came out and learned how to sew and construct stuffed toys. 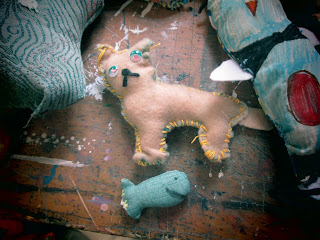 As usual, we started off with a simple 2 sided felt animal so they could learn the basics of sewing. It's important they learn how to thread a needle, start and stop a thread, and do whipstitch, as they need to use the skill for closing up the opening on a machine-sewn softie too. 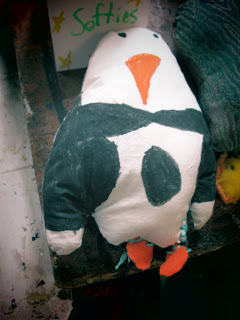 We did  story and character brainstorm to come up with ideas for a hand-colored softie. I have the kids draw and color with fabric marker on plain muslin, and then do either a colored front and back or a colored front with fabric back. There were lots of Happy Feet penguins, a Totoro, and several  Loraxes. Kids who had time also made a friend for their character so that they could do imaginative play. 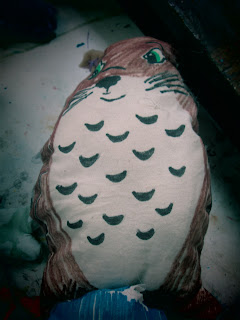 These stuffies are sewn on the machine, but some kids added on handsewn limbs. I love seeing kids 2D drawings turn into 3D stuffies they can play with! 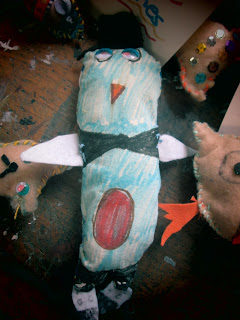 With the kids ranging in age from 7-10 there's a huge difference in motor skills and craftsmanship. The rabbit sleeping on the moon below was AMAZING! She appliqued the silky white bunny over the muslin moon on both sides, stuffing under the applique before closing it up. I was really careful on the machine for her, and it came out perfectly! 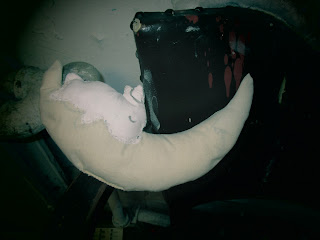 The last project was a build-a monster. We did a roll-the-dice game inspired by the cartooning game "Pick and Draw".  I didn't have a deck, so I drew out 6 options for body, head, arms/legs, and facial features, and gave the kids a dice to roll to select their part. I wanted the kids to get the idea of how the pieces would fit together in sewing as well as get some inspiration. In the past I would have the kids draw their design, and then I would draw out the patterns they needed, or have them draw them. Unfortunately, it's REALLY hard to get them to understand the need for a certain scale when sewing, and they always draw things too small or skinny. So for the first time ever I came up with some simple templates that gave them construction options, and showed them how they could mix and match to make a creature of their own design. It was a good happy medium between my need for scale and consistency, and my desire to let them have choice and creative expression.. For the monsters I let them use any fabrics they want from a big bin- mostly rescued upholstery samples from the design center interior design showroom (I still have 3 huge bins full from when I worked at one 5 years ago!!!) So the creatures have very interesting patterns and textures. 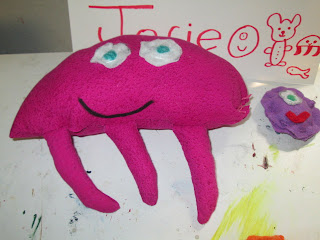 We ended up making over 60 stuffies together over the course of the week. They went home with full arms and happy faces.
I hope this video uploaded okay. My mornings were spent with fifteen 11-13 year olds for an animation workshop. This was the very first time I've taught the workshop and taught in our digital lab, so I had a bit of a learning curve. We started off with making flipbooks from videos of the kids in the courtyard. We watched a bunch of stop motion animations and learned the history and process of stop motion animation. Then the kids spent an entire morning working in teams to make the animations in the video above. Finally, I met with each team for editing while the kids worked on some photoshop drawing animations:
I was really pleased with how well the students worked together- one thing that helped was a worksheet I had them complete to plan out their storyline, shooting location, and supplies needed. The content was totally up to them. Some groups were very invested in telling a story while others explored movement of figures and materials. On the last day we invited parents for a viewing party, and we had a great turnout.

I'm very thankful I had these creative kids to work with this past week. Art is life-giving.