I've been doing screenprint for quite a while, but with my kids I usually teach using freezer paper or contact paper stencils to block the screen. I rarely venture into photo process with them because the added complication of coating screens isn't direct enough for my pre-teens. Personally I really like the hand-drawn qualities of using screen filler or the boldness of cut stencils. So I've never really done any 4 color process in screenprinting, and it's been niggling in my subconscious that I really should know how to do it.
So I started off with a photo I took at Cumberland and American Streets of the trash-strewn lot in front of this beautiful mural, and doctored it a bit in photoshop to boost contrast and saturation. I also tried to format it so it looked kind of like a Polaroid or one of those IPhone instamat pictures (I don't have an Iphone and I so want to try out some old-timey photo aps). Then I proceeded to get totally lost in Photoshop trying to figure out how to do the color separations!
Google to the rescue! I found this fabulous video tutorial that not only goes step by step for doing the separations, but also showed how to build the image back up to check if it was done correctly. Check it out. He's a little rambly, but it's slow enough to follow easily. I also kept stopping and starting so I could do each step as he described it. And here's the result: 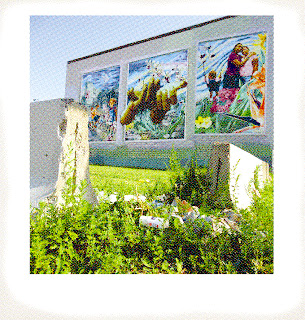 That's my re-built image in CMYK. I'm hoping to burn my screens tomorrow, and then I can try it out with ink on paper. Unfortunately it probably won't turn out as perfectly as my lovely Photoshop play.
Posted by MarieE at 12:21 AM