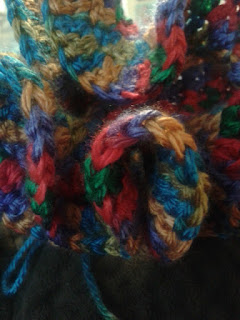 Something about all our talk of networks and topology and brains made me think about hyperbolic structures and crochet. Crocheting mirrors some network structures. I think of a crochet stitch like a little pi symbol, with a loop at the top (a node) and two legs (edges). A hyperbolic surface curves to maximize surface area. In physical space it takes up 3 dimensions, but topologically it is flat. If you have an endlessly branching network (each node subsequently branches off to two new nodes ad infinitum) eventually you run out of physical space to place the next generation of nodes as they branch outward and the surface begins to curve. The brain appears to have folds and ripples like this- it's one way to pack a lot of surface area into a small space. I made this small hyperball in a rainbow variegated yarn, which when complete reminded of the fMRI colorations showing activity and connection. I might make another in white and then stain specific areas. 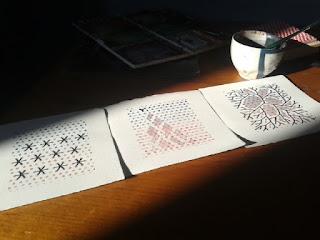 Just as I felt a need to explore the topology idea in my previous post, I also want to explore different network structures. I played with "inking" this polka dot stamp I had with gradations of watercolor. It's beautiful, subtle color. The polka dot stamp creates a consistent and reproducible field of nodes upon which to play. I first did a little pencil and watercolor work (below) inspired by some discussion of the "Plinko" game. 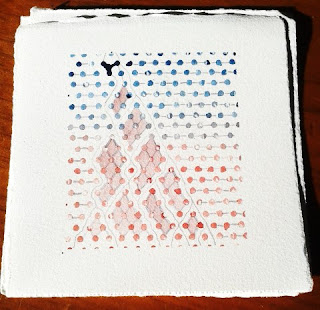 Then tried a branching network, stitching the edges and then painting in the resulting negative space- the holes. I didn't quite understand the lecture we had that discussed brain topology and "holes". Have to think about ti some more. I'm still playing. 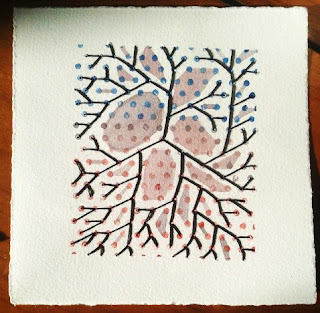