A view from the studio 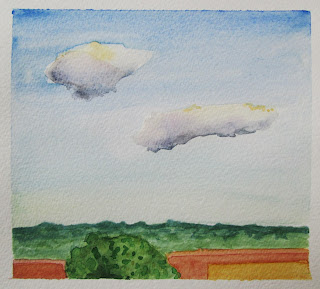 Before I left for Montana I bought a new watercolor pad, but ended up so busy stitching I never really used it. So I thought I would do a series of small paintings just looking out my studio window. The first one was on a sunny day with lazy puffs of clouds drifting by. 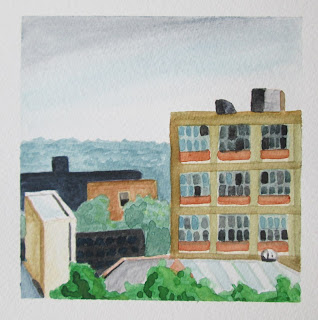 Yesterday was gray, and it even started pouring as I was trying to paint the view. I haven't painted in a long time, and it's nice to do something quick for a change. 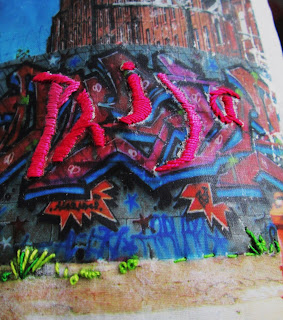 I worked on making another fabric postcard as well. This one was on top of a photo transfer. The image got reversed in the process, making the graffiti truly indecipherable, so I stitched in my own word.It turned out looking more like "phija" instead of "Phila", but whatever. Stitching through the gel transfer felt waxy after a while, and satin stitch is not the best stitch to use as it cracks the film after a while. Also,as I fused the stitched transfer to a paper backing I ended up melting away some of the color, aging it a bit. It's all an experiment! I finished it off with a black twill tape binding. I do like the paper backing instead of a fabric backing, though as it's much sturdier, however, the fusible web didn't really want to stick to it for some reason. I think it would be fun to do a bunch more of these Philly postcards, but with non-traditional images. My Philly, not a touristy Philly.
Posted by MarieE at 12:52 PM