One of my favorite pieces at the Pittsburgh Center for the Arts last week was part of the Interplay exhibit of Pittsburgh area artists, although it totally could have been included in the Fiberart International show. The view below is what was seen upon entering the room, a central sculptural piece, actually a chopped-down tree that had grown around barbed wire fencing, entitled "Nature vs Nurture" by Hisham Youssef. 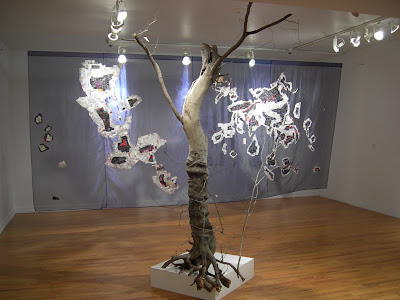 Behind the stark, twisted trunk was a backdrop of the world entitled "Continental Drift" by Wendy Osher. The world map is instantly recognizable, but one also notices that things aren't quite right- the proportions of the countries are distinctly off. Closer inspection reveals the countries are made up of little appliqued clothing tags. The number of clothing tags naming each country determined the size of the country on the map. The USA shrank beside Mexico and Guatemala. "Third world" countries loom large and expose our consumeristic dependence on the labor and resources of other, poorer nations. Consumerism is a social justice issue beyond the concerns of environmental awareness! 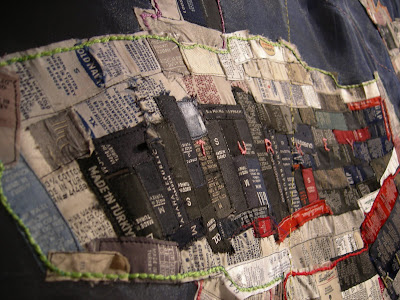 The pairing of these two pieces in the room had great visual and psychological impact on the viewer.

Of course I had to photograph the US and Turkey on the piece because I'm here and my heart's loves are over there for the next few weeks still. *sigh*
Posted by MarieE at 10:31 PM