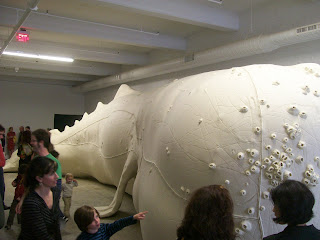 I'm not really sure if photos were allowed or not, but I caught a snap of the great "Mocha Dick" by Tristin Lowe at the Fabric Workshop Museum during the May First Friday opening.
This whale is a sight to see, lounging on the 8th floor of the new FWM building in Center City. It's made of felt, zipped together in panels, encrusted in barnacles and wrinkles.
Funny how things you see spark other ideas and actions. After witnessing the behemoth, I got "Moby Dick", the video with Gregory Peck, out from the library to finally figure out what it was all about. After returning it the librarian asked me if I'd ever read the book. After saying "no" he pointed me toward a poetry anthology with one title reading "Their eyes should be gouged out and replaced with hot coals". The poem basically states that anyone who hasn't read "Moby Dick" and yet considers themselves educated should.. have their eyes gouged out...etc.
So I'm reading Moby Dick. A story of obsessions. Not only in plot but in form. Melville writes obsessively, trying to make the ultimate in in-depth books on whales.
I'm also felting with my Sculptural Fiber Class. Fiber Arts requires a certain obsession. One must be able to do repetitive actions over sustained periods of time before coming even close to creating something substantial. "Mocha Dick" appears to be industrial felt. I can't imagine how long it would have taken to do it by hand. Construction of it must have been daunting enough.
Posted by MarieE at 6:57 PM No comments: 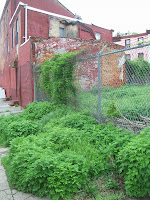 Over the past year I've been doing a great number of cityscape images. For the most part they've been literal, realistic translations of photographs I've taken around the city of Philadelphia, primarily in Kensington. I have a tendency to jump from series to series, from realism to abstraction, but feel a need to be more consistent. Here is a photograph that is pulling me to do something. I love the simplicity of the complementary red/green scheme and the complexity of the myriad textures. It epitomizes my fascination for the fight between urban vs natural sprawl. The literal renderings feel stale to me. So how shall I maintain consistency, broaden a body of work, but feel fresh enough to be engaged? Let's see what happens with it...

Posted by MarieE at 1:11 AM No comments:

This blog will be an effort to document my thoughts and experiences in studio work, art criticism, and community education in the areas of fibers, color theory and art ed. If you are taking one of my courses please browse by labels for your class and feel free to comment.
I am a fiber artist from Philadelphia, teaching at Fleisher Art Memorial and Perkins Art Center, and will be pursuing my Masters of Art Education at Tyler School of Art beginning Fall 2009.

Thank you for perusing!
Posted by MarieE at 12:49 AM No comments:

Labels: color, stitch
Newer Posts Home
Subscribe to: Posts (Atom)
This blog will be an effort to document my thoughts and experiences in studio work, art criticism, and community education in the areas of fibers, color theory, screenprinting, and art education. Please respect my work and link back to me if you use any images and feel free to comment. I am a fiber artist from Philadelphia, teaching at Fleisher Art Memorial, and have recently completed my Masters of Art Education at Tyler School of Art, Temple University.