I've been busy teaching and my students have been busy making over the past few weeks.
I'm doing a once-a-week internship at an elementary school in South Philly for my certification process. These images below come from a mola-inspired project I presented with my 1st grade class in oil pastel on construction paper. The students were learning about the various types of lines. 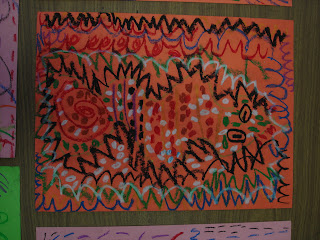 These 2 were particularly successful and inventive, filling up most of the negative space. 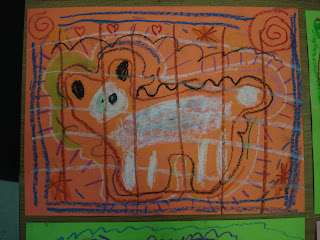 Yesterday I mounted them all on black paper as they'll be hung in the school library soon! I'm very happy with how varied and personal they all came out. 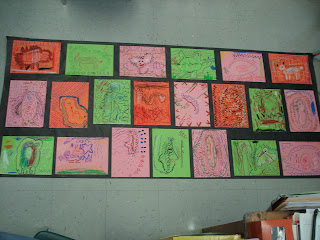 I haven't had much time for my own artwork lately, but I'm really enjoying all this work with the kids.
Posted by MarieE at 5:48 PM 2 comments:

so....... my Saturday students are obsessed with Domo, and I'm totally clueless. In the efforts to meet them halfway, I found this cutout pattern of domo. I think it will serve as the perfect example as our last screenprint project is going to be a 2-D print into a 3-D object... 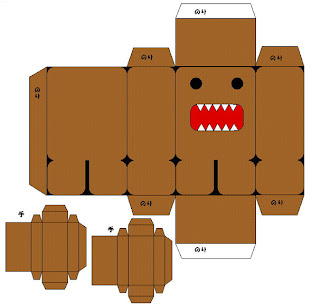 Not cause I wanted to, this is my "self-portrait assignment". Critique tomorrow.........ugh. 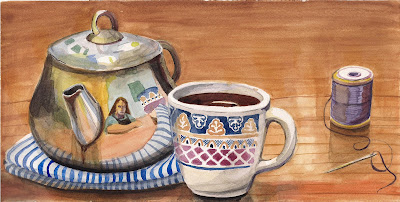 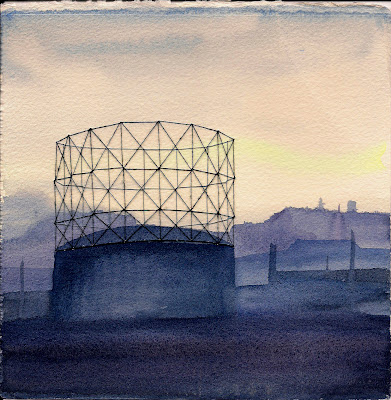 ﻿
This is one of my favorite views from 95N as you leave Philadelphia. This bit of geometry overlaying the cityscape. I painted this in my watercolor class, then came home and stitched the structure with sewing thread in gray and black. ﻿It's kind of fun stitching on thick watercolor paper- you can take larger stitches and not worry about how they'll pucker the surface.
Posted by MarieE at 12:22 AM 4 comments:

Ok, thanks to the response on my last post, I thought I'd round up the information on blackwork a little. I wanted to do Blackwork with my Stitch and Surface students because I think it's an amazingly beautiful technique. I'd never done it before myself, though, so it was a bit of an ambitious project. However, once in the thick of things I discovered... Blackwork isn't that hard!! You can get amazing results VERY easily. 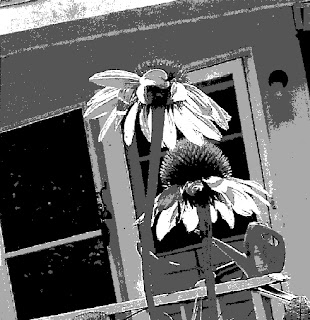 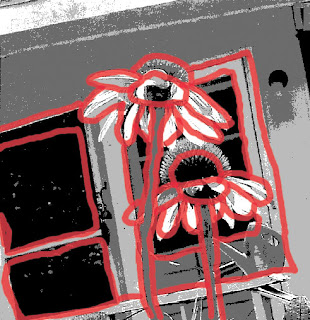 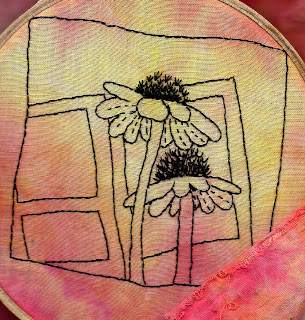 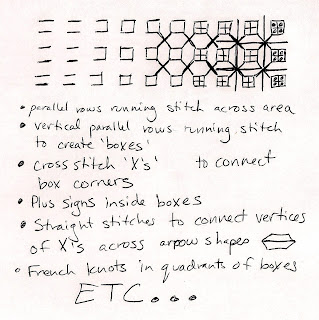 ﻿So, it does take a bit of planning, logic, patience, and creativity, but it's so satisfying. I recommend trying out a sampler piece- no image, just create boxes filled with various patterns. I have one student who is doing a sampler piece and letting the patterning grow organically without divisions. And start off small!
Hope this was helpful. Happy Stitching!
Posted by MarieE at 11:22 PM 6 comments:

I've been happily stitching tonight now that my midterm exam in art ed is over. I also wanted to get this piece nearly finished to show my students tomorrow some of the possibilities. It might be finished... but I might continue it sampler-style to demonstrate some pattern stitches as a border. We'll see.

This was a lot of fun! And blackwork isn't as scary as I thought.
Posted by MarieE at 1:56 AM 5 comments:

This is the only thing that has kept me sane this week. I find if I haven't been stitching for a while I find it harder to manage stress and frustration. So I consciously decided to work on my embroidery. Stitching is meditative and calms my busy head. Often I have so many ideas bouncing around it's hard to focus on one task-like reading textbooks.

Had an interesting debate about art for mental health vs. art for aesthetics this week during a critique. Wonder what other opinions are out there.
Posted by MarieE at 12:31 AM No comments: 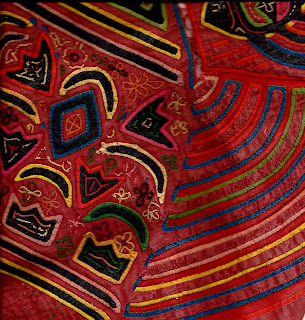 I'm doing an animal line drawing lesson with my internship first graders inspired by Kuna Molas. I could have made do with just a picture transparency on the overhead projector, but I knew my mother owned 2. I asked to borrow them for the lesson, but when she brought them over for me she said I could keep them! I'm over the moon!
Let's hope the kids enjoy it. My excitement is bound to be contagious, so I'm not too worried.
Posted by MarieE at 1:26 AM 1 comment:

I feel like I haven't picked up a needle in eons! But today I started a blackwork project with my Stitch and Surface students, and I actually got to start my own piece. We went to the digital lab and used photoshop to posterize and pixelate our images into a grayscale bitmap pattern to use for the blackwork design. The computers were a bit of a challenge, especially since the program was a bit different from my own, rendering my directions useless. But regardless, everybody ended up with a usable pattern to follow for their project. Next week we'll work on choosing patterns to fill in areas. And here's my piece so far:

I recommended outlining the areas and then selecting fills for each value. Some people weren't thrilled by the idea of working black on white, but I said it was open to interpretation. We're contemporary artists and we can bend tradition to our will! Note I'm working on a yellow and pink hand-dyed fabric. Mostly because it was the only plain-weave fabric I could find handy at 8:00 this morning when I was running out the door! HA!
Posted by MarieE at 2:17 AM 2 comments:

A friend of mine had a henna night/birthday party tonight- a welcome repose from all my school/work life. It was great fun being one of the "artists" and doodling on other people. Here's my own hennaed hand: 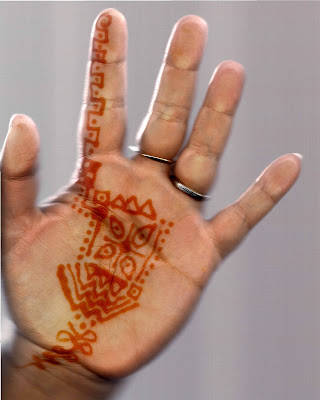 Posted by MarieE at 1:49 AM No comments: 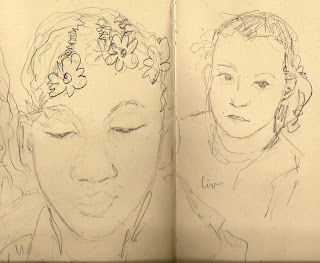 I've got drawing on the mind because I'm planning a lesson plan on the subject soon. These are 2 sketches of some of my students done on the bus ride home from our field trip today. I entranced them with my drawing skills. It's a whole lot better than singing "99 bottles of beer on the wall".
Posted by MarieE at 3:15 AM No comments:

I really love stop-motion animation and artistic grafitti, and nobody combines the 2 like Blu. I just discovered the website where you can view all his videos. And here is the newest...it's pretty long, but worth it:


We're getting flipcams for my residency to do video responses with the kids. Since part of our project is an interactive element with the piece, who knows! Maybe we can make our own animation!! I just bought embroidery supplies for the class- this week we start stitching. Yay!
Posted by MarieE at 11:59 PM 4 comments:


I have to share this because it's been running in my head all week and it's so beautiful.

In other news, I got 25 8-9 year olds to screenprint the world map onto fabric today for our residency project! And we didn't even make a huge mess!
Posted by MarieE at 12:03 AM No comments:

Labels: video
Newer Posts Older Posts Home
Subscribe to: Posts (Atom)
This blog will be an effort to document my thoughts and experiences in studio work, art criticism, and community education in the areas of fibers, color theory, screenprinting, and art education. Please respect my work and link back to me if you use any images and feel free to comment. I am a fiber artist from Philadelphia, teaching at Fleisher Art Memorial, and have recently completed my Masters of Art Education at Tyler School of Art, Temple University.