This morning my parents called- "Want to drive around Philly and find where some ancestors used to live?" Since I'm the Philly local I got to play chauffeur. We were searching out locations where members of my mother's paternal greats lived from around 1880-1910.
Down in South Philly we found an empty lot at one site and two other locations lie under I95! In the museum area there's a lovely park covering up one ancestor's former residence, and a little farther East we discovered another site has been paved over and is serving the Spaghetti Warehouse Restaurant as a parking lot. In my own neighborhood we had a little more luck. We found one empty lot and one standing residence in Northern Liberties, 4 still extant houses in the Fishtown area and one more in the (now)badlands of Kensington. I have a new appreciation for Philadelphia! I've lived here on and off since college, but now knowing some of my ancestors lived around here before it feels even more like home. 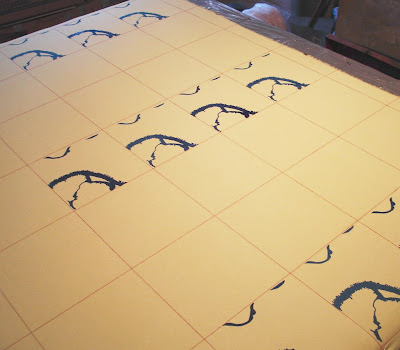 So down in my cool basement I decided to start screenprinting again. Last summer I worked on a collaborative project mapping each partners daily travels and finding intersections amongst us. This idea of daily mapping has been sitting in the back of my head for a while. Last Fall I even made a screen to get started, but other things came up. So I laid out some fabric, pinned thread guidelines down for registration and started printing! Above is after 2 runs. Below is an overlay of my tracing paper map for the second layer for an idea of how it'll look. 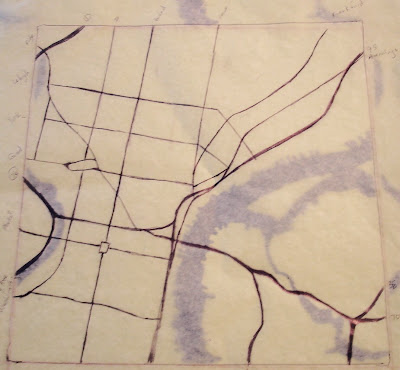 It took 6 runs to complete the repeat as I wanted to let sections dry before printing neighboring quadrants. I think I'll make a photo screen for the next layer. Once it's all printed with the second layer I plan on stitching daily maps for a month! 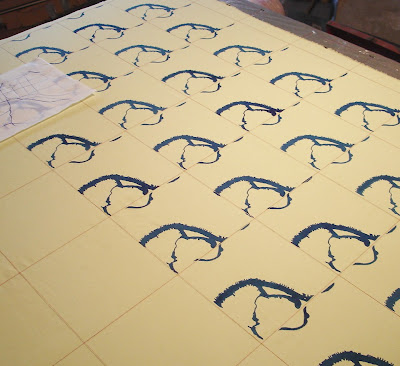 If I marked today's travels it would be quite a spiderweb.
Posted by MarieE at 4:20 PM