My midterm project for my digital print on fabric class was due for critique this week: 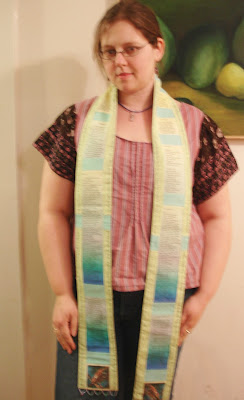 I was interested in creating a piece that involved text, as I love text, but find it hard to embroider massive amounts of text. The inspiration was a selection of Islamic imagery, particularly a long scroll calendar from which I took the long border, short center text format. I was thinking how all the Islamic art I had found had religious purpose- calendars and maps and protective talismans all orient one toward prayer. So I created a purposeful, prayerful, personal object/ritual clothing. 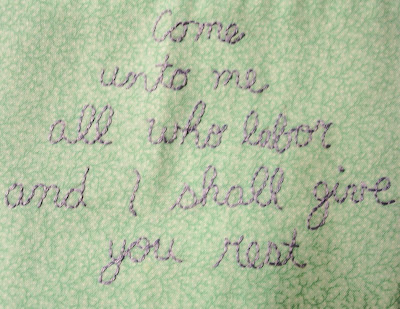 The only embroidery is at the yoke, with a verse from Matthew 28- for those familiar with the verse, the placement at "yoke" is significant. 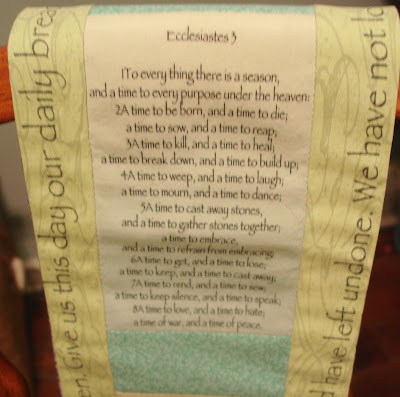 The Lord's Prayer and Penitential Prayer from the Episcopal Book of Common Prayer line the borders, then the centers contain my favorite hymns, verses, and Eucharistic prayers from a traditional Episcopal service, and follow the order or prayer in sequence. "Morning has Broken", Ecclesiastes 3 (shown above), Psalm 139, Psalm 23, the doxology, the sanctus, the agnus dei, Corinthians 13, and "His Eye is on the Sparrow". 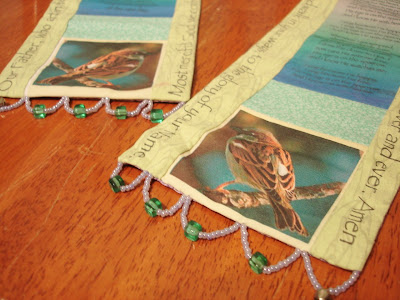 Two sparrows face each other at the bottom- inspired by the song, but also because it makes me remember not to worry.
To include more of the senses in the piece, it was infused with a mint scent, and 2 small bells one the fringe introduce a slight sound.
The critique I got was mostly about the way I made the text- they thought it would seem even more personal if I'd scanned in my handwriting of the texts, which would link it back more completely to the Islamic calligraphy inspiration. I agree- it's a very well-made, clean piece, but I could have considered the text style much more.
Even so, I'm very proud of it, it is very personally significant, and no, it isn't being given to a priest. I don't think it's easy to discuss religious content in art, and I was pleasantly surprised how my classmates responded to it.
Posted by MarieE at 10:32 PM