For the past 2 weeks I've been teaching at NLArts Performing and Visual Arts Camp in Northern Liberties. About 13 campers aged 9-11 were under my charge and they were a fantastic group of kids (including my own daughter- so I'm biased). During the performing arts camp the first week, they were key players in producing the props we used as well as the dialogue we wrote for the final play. 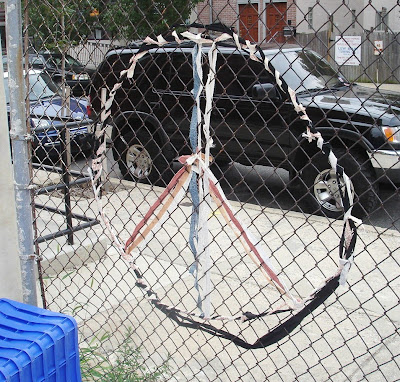 This past week during the Visual Arts Camp the campers focused on the theme "Go Green". All the projects were driven either conceptually or materially by the idea of environmental consciousness. The first project my group completed was a fence weaving, shown above, which reused fabric strips salvaged from interior design samples. The peace sign was a popular motif, but we also had recycling arrows and the 3 R's. Before weaving we talked about how fabric is made, whether it's natural/sustainable or synthetic, how far textiles are shipped around the world for our use and what choices they should make when buying clothes. 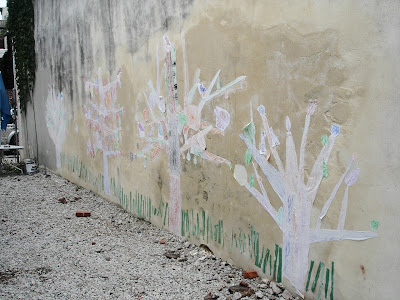 These 2 images above and below feature the wheat-pasted mural created by the entire camp. Students trekked down to Liberty Lands park to do tree/leaf/texture rubbings on paper. We talked about how it's possible to use nature for inspiration without taking anything away from nature to make art. The rubbings were torn and cut to be pasted into the tree shapes on the side of the building. The paste was made from flour and water, and the campers got VERY messy!!! The one below was made almost entirely by my daughter (proud mama here). Both of the projects above should still be visible if you got to 3rd and Fairmount. 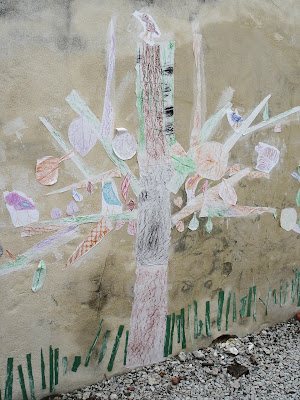 All of the remaining images show my campers' animal/habitat sculptures. The animals were made with clay, which was then painted. The habitats were created with reused cardboard leftover from the previous week's play props, paint, and rocks and sticks found around the building. In preparing for the project the campers brainstormed their favorite animals, what was special about their habitat, and how each animal has special qualities to survive in their habitat. Most of our week's projects were collaborative and more public art. This was the only project that the kids really got to take home. 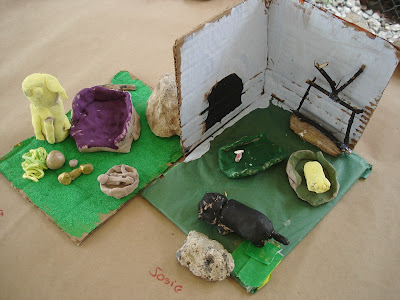 Cats and dogs with indoor/outdoor habitat- a collaboration between 2 campers. 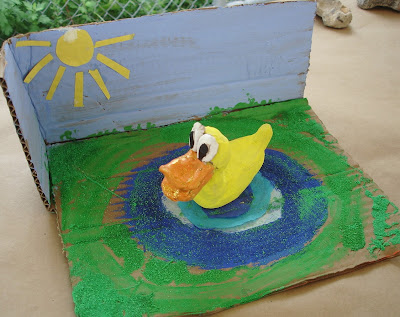 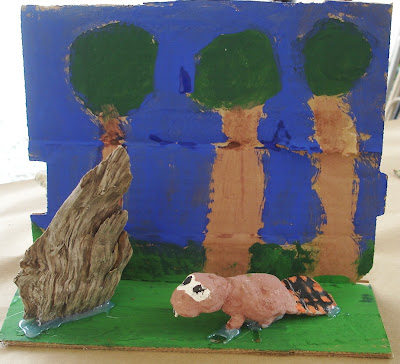 Beaver and nibbled tree in the forest. 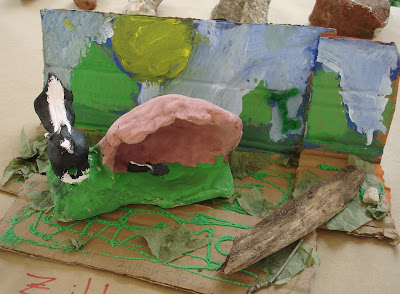 Mama and baby Skunk in woodland burrow. This one is my daughter's! 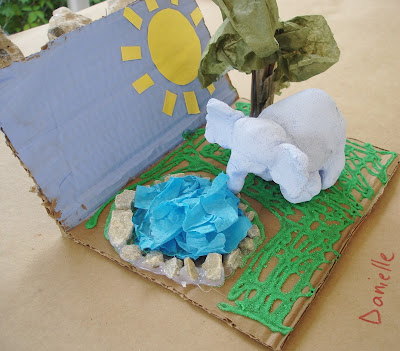 Elephant at the watering hole in the savannah. 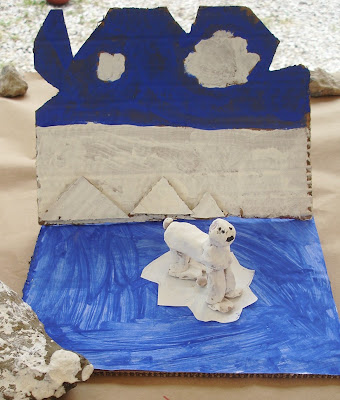 Polar Bear on his lonely iceberg. I like how she did iceberg cutouts to place at the bottom of her tableau, making the top edge sort of snowflake-like. 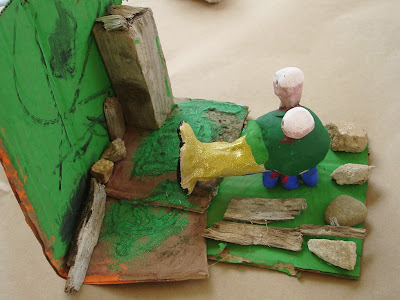 One camper wanted to use more of his imagination and created his own creature.
Posted by MarieE at 2:27 PM