On the very last day of Stitch Week I photocopied a bunch of city photographs to show people some different ways of working from a photo. I had everyone trace over the major shapes with Sharpies to establish the geometric structure of the composition, then switch colors and draw over the photo with ideas for which stitch to use to recreate textures.

I find it very interesting how different people approach the same image. Below is the beginning of Joi Dye's version: 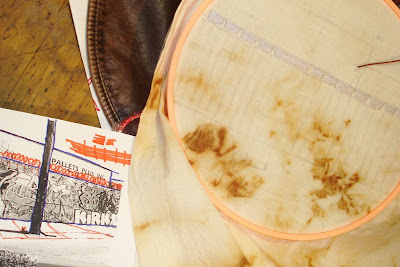 Joi chose our rusted fabric for her foundation, and sketched out her composition in pencil so that she could enlarge the image. Although I suggested she could enlarge the photo on the copy machine and trace the composition with carbon paper, she felt comfortable with her drawing skills and did it freehand. Her stitching started off with recreating the brick texture in gray using a satin stitch (which turned out to be a long running stitch densely spaced- way to innovate Joi!). By the end of class she had a portion of the wall complete and the telephone pole filled in with long straight stitches. Joi was obviously thinking about her composition as areas of color and texture.

Here is Rachel Schade's rendition of the same image: 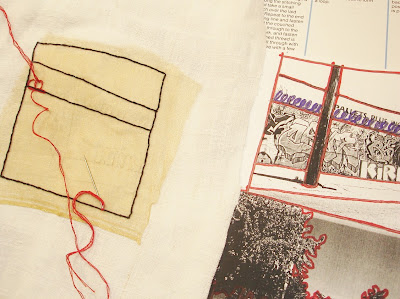 Rachel's is much smaller and began with a carbon transfer of the photocopy and an applique of ochre gauze over the entire composition. The bold black outline suggests that she is approaching her image as more of a line drawing. I was happy to see that Rachel searched out a new stitch to try that would more closely approximate the barbed wire instead of using running stitch. Having an embroidery encyclopedia at hand is really helpful. Props to Rachel for all the fantastic books she brought in during the week!

Both of these artists successfully incorporated multiple techniques for image-making in embroidery which they learned this week. Both artists, although starting from the same image, have a unique vision for their individual interpretation.