I've been just a tad bit busy with school the last 2 days, so here's another inspiration and influence.

These 2 are more literary in nature, and both sort of cross the childhood/adulthood divide in some way.
First of all is the Griffin and Sabine series by writer Nick Bantock. He's an artist and has made picture books for adults, and this particular series consists of postcards and letters between the 2 characters in a mysterious narrative. There are actual envelopes with removable, folded up letters inside the books! That's where he crosses the child/adult divide. Usually books for adults don't have pictures and don't have anything tactile to engage the imagination, but he acknowledges adults' sense of curiosity and wonder which can too often be stifled by... adulthood.
I always admire artists who are able to imbue their artworks with a sense of narrative. It is something I'd like to do, but don't have enough to say yet, perhaps? But it's not just his narrative, but his beautiful textures and color and composition and mystery that take my breath away.

The other literary influence, and this is a HUGE influence in my life, is Madeline L'Engle. I grew up reading her Wrinkle in Time series as well as the Austin books, but she also wrote memoirs and books on faith for adults, so I've been able to hear her voice over the course of my life. I'm reading "And It Was Good" right now as my bedtime reading, which explores the book of Genesis. Her influence has been both creative (check out her bibliography- that's one prolific writer!), imaginative, and spiritual. She died in 2007 and I felt like I'd lost a grandmother. (Is it strange to mourn someone you've never met? Maybe that's how people felt when Michael Jackson died.) 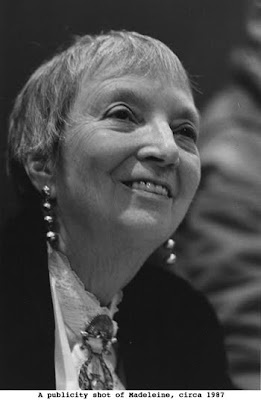 Things you read can touch you so deeply. Madeline L'Engle always wrote frankly about life, relationships, and faith, so when I read her I feel like she's talking right to me.

I always wish I could read minds. Not to be sneaky, but to communicate in a more essential way than speaking creates. Reading is like mind-reading, because you're able to envision the author's point of view and see how another person thinks.