Last Saturday night was the 3rd and I think final installment of FluxTask at Fluxspace. The project was organized by artist Oliver Herring and involved lots of people, lots of materials, and the open spirit of creativity most people tend to lose at about age 13. 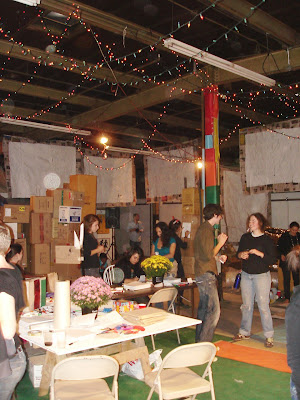 The object was to write a task that could be completed using whatever materials were available without causing damage to property or persons, place it in the TASK box and retrieve a task for yourself to complete. After accomplishing the task you were to write a new task to add to the box and start a new one. This could go on ad finitum. The photo above was near the beginning of the evening while there were still pristine piles of materials- like going into ACMoore and being allowed to use whatever you found to make art on site! 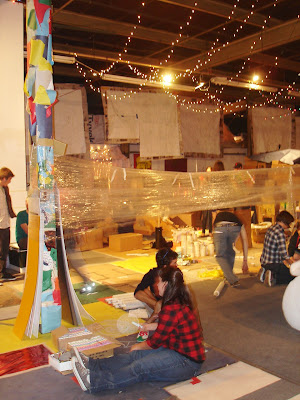 Things started getting a little crazier. Above you can see the pillars wrapped in saran wrap- someone actually was able to use it as a hammock! It eventually became a volleyball net with a blown-up plastic bag as ball. 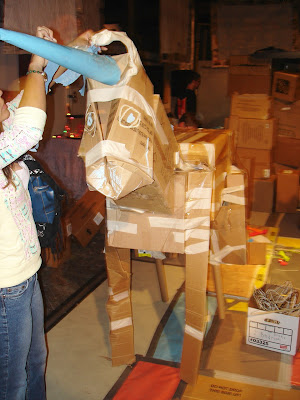 I turned around and suddenly there was a life-size unicorn behind me! I should have gotten a side view- the whole thing was quite anatomically accurate (don't think dirty, now). 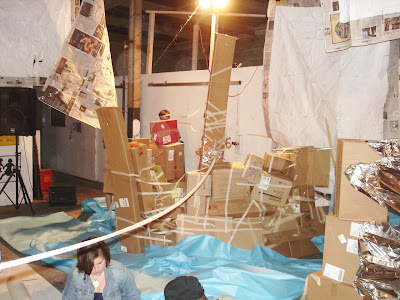 Next thing you know there's an iceberg island in the corner. Or maybe a boat... 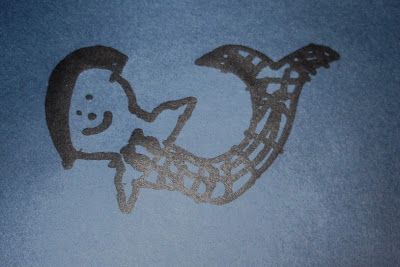 The best part was when my usually non-participating husband FINALLY added a task to the box ("Draw a Mermaid") which not one minute later was pulled out of the box by a 5-year-old boy who drew the image above. His mother tore the image off the roll of paper and kept the task paper to take home as a souvenir, creating some magic for my love.

Throughout the evening I created a pipe cleaner car, drew a hopscotch board, ruffled someone's hair, helped build a fairy house, created an invisible dog leash, had my feet traced, and had my legs hugged.

Thanks to Oliver Herring and the people of Fluxspace for creating an unforgettable experience!