While other people were having parades and barbecues on the 4th, I stayed up in my cool, air-conditioned room with my daughter getting crafty. I'm teaching a softie-making class next week at Fleisher and wanted some new exemplars. It's very handy having a creative child when you're an art teacher. I borrow her imagination all the time (and test run projects with my 1-person focus group). It really helps me think out what I'll do in the classroom and understand what my kids might have trouble with. Unfortunately, she keeps growing and getting older, and she's already surpassed the age of most of the kids I teach regularly. 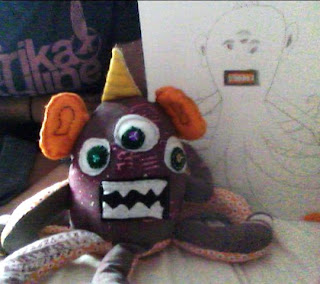 But anyway, we had a lot of fun transforming her monster sketch into a real softie. I marked out some pattern pieces based on her drawing. She picked out fabrics for all her parts and cut out the pieces. She then did all the handsewing on the felt eyes, ears, and mouth. (Whoot! my kid knows how to do running stitch, backstitch, and straight stitch and I didn't even have to remind her how!! When did that happen? Oh yeah- she's stitched for me before...) I pieced everything on the machine and handed off all those tentacles for her to flip and stuff. She did the final blindstitch on the base. I realized too late that we forgot the eyebrows in her drawing, and instead of the claw hands she had at the sides, we moved 2 tentacles up. The head is also not as balloon-like as her drawing... but all in all it's a very nice interpretation, and she's very happy with it. It's quite a character! 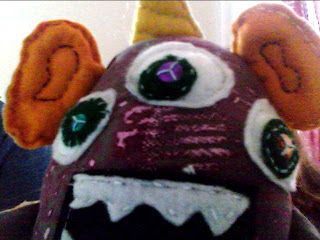 Wish me luck next week- in the past I've only done this class with about 8 kids, but I've got a whopping 14 signed up for it this summer! I almost don't want to bring this particular monster in to show them as EVERYONE will want a creature with 8 tentacles to sew in. YIKES! Luckily I will have an assistant who knows how to work a machine, and I think we'll pull it off. Who knows, maybe I'll even snag a teen intern for help. It will be a very exciting week to say the least!!
Posted by MarieE at 12:23 AM