Last month my mother bestowed upon me a tin box full of my great-grandmother's quilt blocks, which had sat in her basement since we moved there 25 years ago. They smelled awful, and some were disintegrating, but I handwashed them, hung them to dry, ironed, and sorted them out. Most of the blocks were pieced 4-squares, a few were pieced 16-squares, and some random ones were pieced crazy quilt style.
I thoroughly enjoyed sorting through the patches, wondering at my gran's sense of design and color, curious where the fabrics had come from. I started playing with new and non-traditional color juxtapositions of the 4-squares to create some larger patchworks, disrupting the orderliness of the lights and darks. Here's a scan detail shot of the first arrangement, which is actually a 9-square piecing of Gran's 4-square blocks. 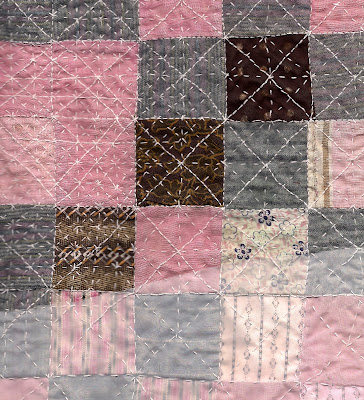 ﻿The pinks and grays reminded me of the wintery landscape we've been experiencing through January and February, so I laid a swath of white organza over the bottom to make this more land-scape like. Then I basted the organza, quilt blocks, and a white backing cloth together, and with white thread I've stitched a trellis-like pattern in backstitch and running stitch reminiscent of sashiko stitching. Now over the top I'm planning on stitching a viney pattern in stem or satin in a dark brown to act like trees. Maybe something William-Morrisy: 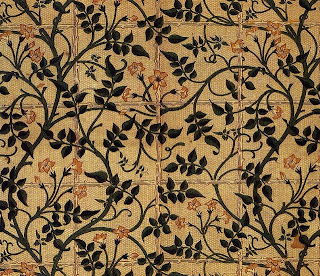 How's this for some photoshop sketching: 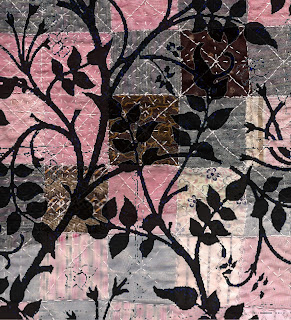 It pleases me to no end that I'm actually still making some art while doing my student teaching!!!! If ever there was a time for the meditative release of embroidery...
Posted by MarieE at 12:58 AM