This past lovely Fall Friday afternoon I found my way over to the Haddonfield Historical Society in Haddonfield, NJ in order to take a look at their collection of needlework samplers. The Haddonfield Historical Society plays a rather significant role in my personal artistic development as it was after a preschool field trip there that my teacher asked us all to draw something we remembered from our visit, and I drew (in high detail and accuracy for a 4-year-old) a row of dolls upon a mantelpiece from their doll collection. The teacher remarked to my mother after seeing my drawing that I just may have some artistic talent, and my mother thereafter always allowed me artistic opportunities and access to supplies. In addition to an artistic connection to the HHS, their collection includes a number of artifacts owned or created by several of my ancestors (albeit branches of the family, not direct lines), as I have ancestors living in the Camden County area back to the 1600's.

So back to the samplers! The HHS has a truly rich variety of needlework, with samplers spanning from 1700 to 1896. It represents an accurate chronology of style and purpose consistent with embroidery artifacts throughout the original states. As I'm preparing for an art history presentation on the subject, I hope you'll bear with me as I survey this collection.

The Mary Hudson sampler of 1700 above represents typical early samplers following the long band format that came over from England. It includes a variety of stitches such as cross-, back-, satin, rice, and eyelets, and explores a variety of motifs including "Indian Pink" zigzag vine, an alphabet, and text that reads in continuous lines without care for the beginning and ends of words. Mary Hudson created it at age 9. Diane Snodgrass, the collections manager at HHS told me that the Camden County Hist. Soc. owns a similar band sampler, a bit longer and rolled, that shows obviously how the mother or instructor stitched a row as an example and then the young embroiderer stitched a copy row. This example is not so obvious, but perhaps one motif in the row was made and then followed by young Mary. Although I wonder whether the missing satin stitches in the daisy below are a result of wear and tear and age or a variance in craftsmanship. 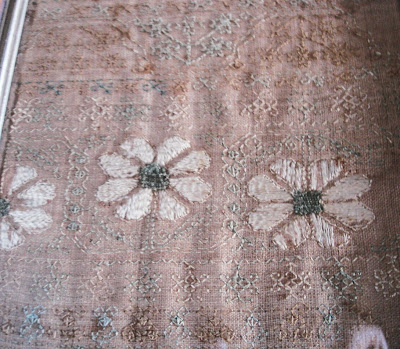 The Letitia Matlack sampler of 1736, created at age 13, shows the beginning of the development of a more American style. It is worked entirely in cross-stitch (not as ambitious perhaps technique-wise, but certainly more so in terms of composition). The typical strawberry vine has shifted to become a border instead of strictly a band, the format has become more rectangular, text other than an alphabet is included, a short family tree is listed, and the placement of motifs is more random. The text reads, "Favour is deceitful and beauty is vain, but a woman that feareth the Lord, she shall be praised. Give her of the fruits of her hand and let her own works praise her in the Gates." Among the tree-of-life motifs is placed additional text reading "Learning is an Ornament". This shift in style and montage of motif is the focus of my research, as I'd like to think of samplers as the "pop art" of their day absorbing multiple cultural influences. 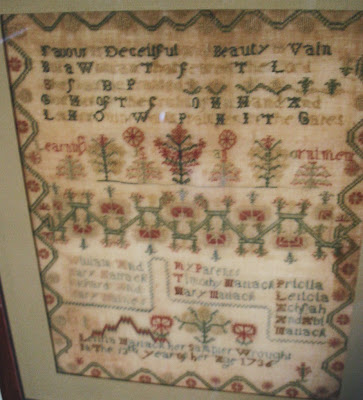 Forgive the awful photo, but below is the sampler of Mary Troth (my ancestor!!!) dated 1826. I'm including it more for sentimental value than artistic, but you can see how the strawberry vine has recurred but been abstracted. The fact that this sampler is purely alphabetical makes me think that was probably created as her very first needlework, probably in a school setting at a young age (I've got to look up her birth year to know how old she was when this was made). I believe she was sent to study at the Westtown School in SE Pennsylvania and also created one of the embroidered globes they are known for. 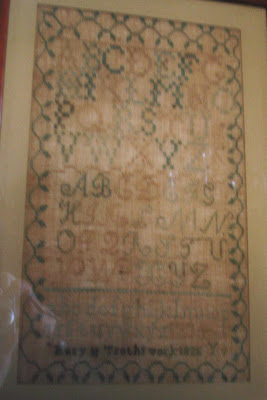 The work below is of A.R. Clinton in 1831 (at age 9) and shows the more pictorial development of American samplers. It is much larger than the previous examples, and more square in format. It contains a Greek Key border, a fancy strawberry border, Quaker square motifs, text, and a lush rose bouquet and vase. The text reads "This work perhaps my friends may view When I have bid this world adieu. And whilst these blooming flowers they se (sic) Then will remembrance picture me". The greek key pattern would have been popular during the Georgian and Federal periods, and so it's interesting to see this architectural motif in a sampler- further evidence of embroidery's absorption of popular culture of its time. 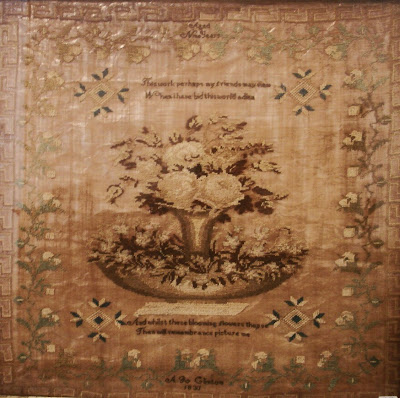 The quaker square motif in the Clinton sampler is evidence that the girl was likely enrolled in a Quaker school, of which there were many in the area and where many of our young embroidering 19th century ancestors learned to ply the needle. 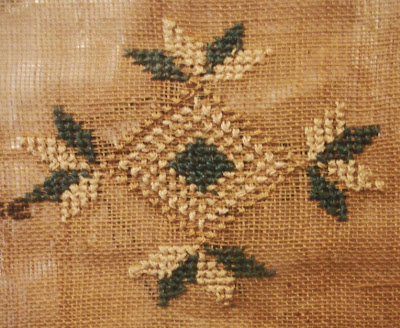 The same motif shows up in the very late Caroline Pearce sampler of 1895 detailed below. This sampler is the same size as the Clinton sampler, and contains an extremely similar strawberry vine as well as the quaker square. However the Pearce sampler has only the "signature" text, no phrases, and is a compendium of motifs "clip-art" style. With no research on it yet, one wonders whether at such a late date if Pearce created it in a school still or based it on other inspiring samplers. 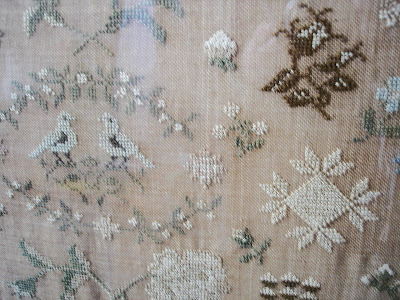 The Haddonfield Historical Society has not only samplers in their collection, but also 2 silk embroidered paintings. Here you can see the mourning embroidery c.1800, maker unknown. The painted text on the monument reads "Sacred to the memory of the illustrious Washington". While many mourning embroideries are in honor of the stitcher's late family members, a great many honor the legendary President Washington (emerging pop culture/cult of personality!). Most include a painted background and faces, a monument, a weeping willow tree and one or more figures in dramatic mournful poses. This example is in its original oval frame with gold and india ink on glass. The india ink has flaked off a great deal and stained the picture, requiring some conservation. 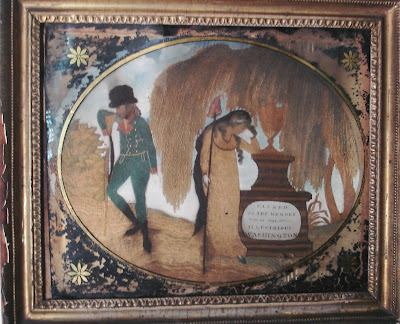 I thank Ms. Snodgrass and the Haddonfield Historical Society for allowing me to photograph the work for my research, as well as for her help in examining the works. Anyone interested in researching objects like these should really look into local Historical Societies- they are very cooperative and excited to have people interested in their collections. And if you're interested in seeing an excellent range of American samplers, take a trip to Haddonfield!
Posted by MarieE at 12:56 AM