sampler mandala, or 3 birds with 1 stone

My Stitch and Surface class began last week at Fleisher, and I launched my students off with a mandala sampler project. This idea is very simple: start with a button or bead in the center, and then complete a ring for each stitch you want to practice. The hard part is keeping the circles circular! Below is a scan and photoshop manipulation of a 6 inch mandala sampler I stitched this week as an example (bird #1): 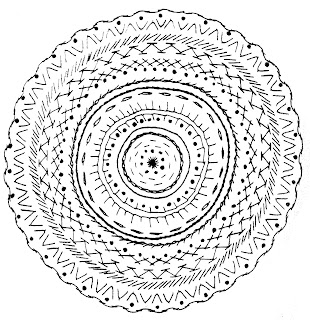 The stitches from the center outwards are: eyelet, french knots, running, chain, whipped backstitch, french knots, buttonhole, lazy daisy, stem, twisted chain, french knots, herringbone, chevron, straight, fly, french knots, and interlaced running.
I made the photoshop manipulation so that I could transfer the image to a screen to print as a motif. Next week my Silkscreen on Fabric students will be doing a motif printing project, and I thought this could be printed out as a pre-printed sampler for someone to stitch over (bird #2).
I also thought this motif could be put into repeat, so I played a little more: 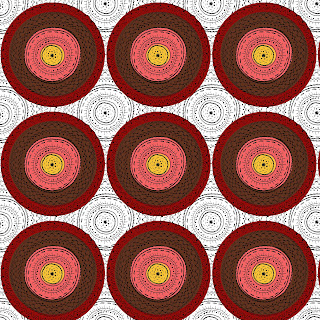 In March I will be participating in an exhibit called "Not a Stitch" which will have works that contain textile-inspired imagery, but which are not themselves stitched. I think I might have found the project I want to do for it! This would be printed in repeat and would reference both embroidery and fabric design (bird #3). The tough decision will be whether to print it on fabric or on paper....
Posted by MarieE at 8:23 PM