All I can say is "Wow!" I went out to see some gallery shows last night, and started off with Little Berlin's show "Where It's At- Viking Mills Artists", which was a group show curated from the studios of artists in Viking Mill, which Little Berlin is now housed in. I feel like Little Berlin has really been taking things up a notch lately. They have a great new whitebox space, albeit off the beaten track, and this show really impressed me. 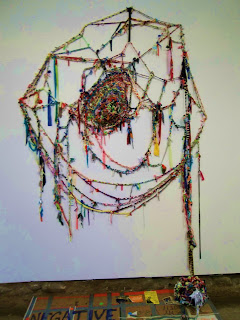 Reese Juel's spiderweb of reclaimed fiber strips was like a bulls-eye. Where's it At? right here. I wondered if this piece was going to evolve throughout the show- there was a huge ball of wound strips still connected to the spiral, ready to keep going. The ball was probably supposed to help connect the wall piece to the floor piece, but I could have done without the floor piece. It's a challenge to elevate simple/recycled materials and push them past their trashy boundaries. The web could have done it. The floor collage of cardboard and notes and scribbles didn't, although that's probably where her ideas were illuminated. I know I was immediately drawn to the fiber piece just because it was fiber, but this installation was a good bridge piece between aesthetics among various parts of the show. 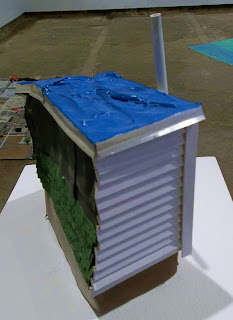 There was some great sculpture in the show. Jay Hardman had several scale-model like constructions. One above) was like an architectural model for the aftermath makeshift building of flood disaster times, but so pristinely crafted. I love well crafted things. His pink lattice piece, below, was so simple in comparison, but had its own power. It reminds me of James Turrell light made solid and textured. 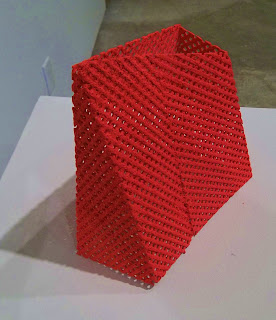 Ally Crow had a small-scale sculpture in carved bleached maple. I actually would have liked to have seen this piece on the wall instead of propped on plexi on the pedestal. I bet it would have great shadows. This kind of intricate carving thoroughly respected the material, but created a sense of fragility and tension, which is surprising to see in wood. It reminded me a bit of heart ventricles and veins. Aggh! I just visited her blog where she has much better pictures of this piece on the wall (great shadows- I knew it) and shown as a MASK! Now I like it even more. 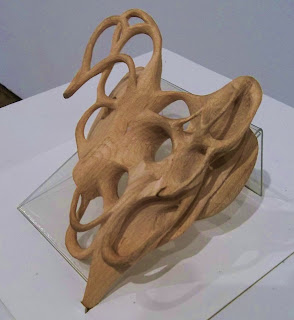 Another fragile sort of piece was the wall of portraits on paper by Emily Kane. 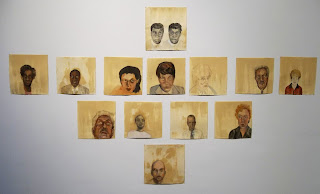 The portraits walked a fine line between caricature and sensitivity. I liked her grouping of them- like a family tree or like a screen full of facebook friend suggestion thumbnails. they're all awkwardly stuck with each other. A light coating of beeswax soaked into the paper gave them an aged look- like old photographs. 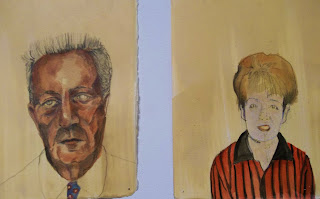 I'm curious to see where Little Berlin goes in the next months and years. Their whitebox is beautiful, but their old space in its raw state and compartmentalization was so inviting for innovative installation. This show was really put together- is that a reflection of the artists in the show or new blood in the membership? I guess we'll see.
If you haven't been to Little Berlin yet, check it out. It's worth the visit to Kensington and the labyrinth of Viking Mill courtyards to find their enclave. Viking Mills is at the corner of Hagert and Coral st, just across the street from Coral Street Arts house.
Posted by MarieE at 10:05 PM