I wish it were me off to Denmark, but instead it's some artwork. Here are 2 finished pieces for Hanne Bang's call for handkerchiefs embroidered with the text, "In a war, someone has to die". Mine is the black and white piece on the right, and one of my Stitch and Surface students, Anjeanette, prepared the one in green and white on the left: 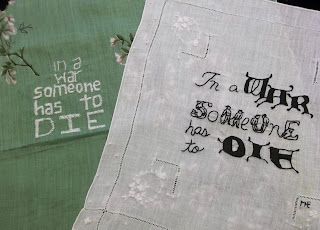 I don't personally know anyone who has died in war, but 5 of my family members have served in military forces in times of war. I'm awfully glad it was never their turn to be the "Someone". 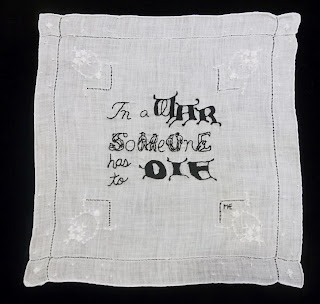 I love the "people" font I found for the word "Someone", for in the "S" is an adult reaching toward a child, in the "M" are two swordsmen fighting, in the "O" are another 2 men interacting, and in the "E" is a despondent seated figure. They were incredibly fiddly to stitch! 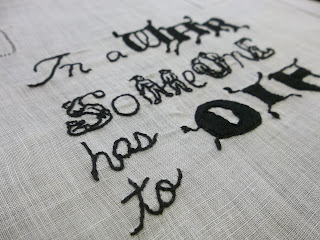 Anjeanette used loosely satin-stitched block letters throughout, but placed them so perfectly in the negative space of the green handkerchief, that it creates great contrast to the soft floral. 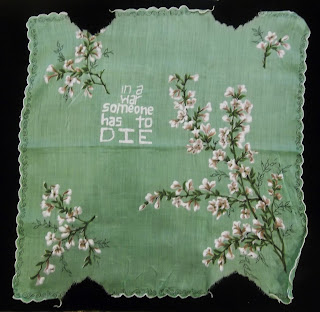 We've been working on a text piece in class, and one of the things discussed was how font, scale, and color can add meaning to whatever words are used. 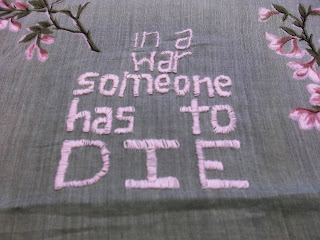 ﻿Here are some links to some other individuals I've seen who are also participating:
Kjersti Faret
Olisa Corcoran
Thrifty Finn
Ansie
Jeanette Nord
and the project facebook page showing many more