It's summer art camp season! Critter Softies was such a hit last year, that we offered it again this summer at Fleisher. I had 8 kids aged 8-10 join me for a new adventure in fiber art. We did felt finger puppets, a 2-sided marker detail creature, and a multi-part patchwork creature. Here are some of he results:﻿ I loved this monkey (that's a lot of marker coloring since we started with white muslin), and this patchwork duck. The duck's wings were left unstuffed for some flop, and the felt beak was sewn on before assembly so it would also stick out and flop a bit. 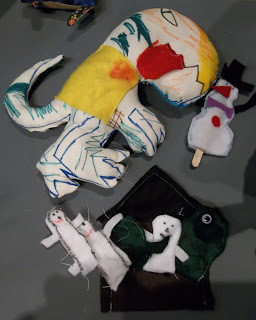 My one boy in the class made this "sick dinosaur" complete with thermometer, bandaids, blanket, and tongue sticking out. His felt creatures include a family, 2 dinosaurs, and a house for the family to hide in. 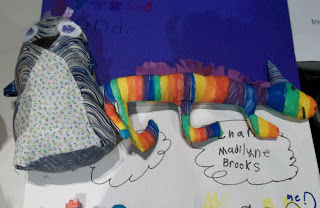 The rainbow unicorn was quite a feat to stuff with those skinny legs and the clumpy fill I got from DickBlick. I've now discovered that brand names in stuffing matter- Polyfil and Crafter's Choice are the best- nice and squishy. 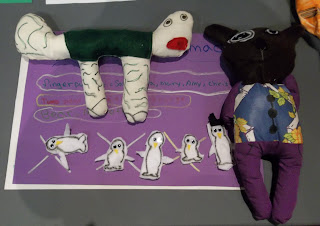 The turtle at the top there ended up being a 2-headed turtle because I didn't catch her in time to remind her to flip her image for the 2 sides to meet up properly. But her teddy bear turned out really well. 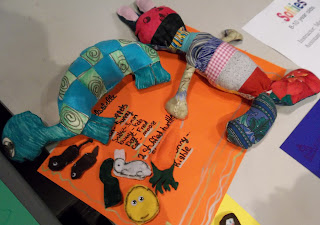 This turtle had a whole patchwork of felt squares to applique on for the shell, and the bunny rabbit had a very complicated selection of patchwork that she planned out before we could sew it.
The kids were incredibly focused for a whole week of softie-making. It's always a bit of a whirlwind because I do all the machine sewing for them. But I love getting to be a part of their creativity and help them bring the visions of their imaginations to life!

This summer I'm also teaching a grown-up softies class. We're 2 weeks into a 6-week class, and there's already been some fabulousness I hope to share soon.
Posted by MarieE at 3:16 PM