With my errands done in Center City and still 40 minutes left on my meter, I headed down to the Gershman Y on Broad and Pine with a vague recollection that there was an exhibit I was interested in seeing. Yes!! Mapping: Outside/Inside is showing in the Borowsky Gallery and features one of my favorite artists: Joyce Kozloff. Here's a little tour of the space with a piece from each of the four artists: 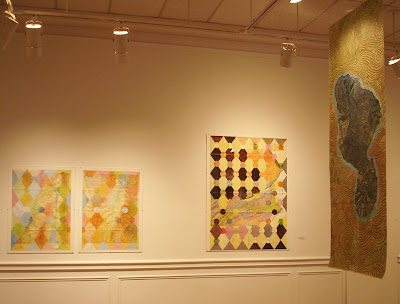 Eve Andree Laramee had a selection of paper maps painted over in acrylic, altering the perception of the space represented, concealing and revealing certain features. Alas these blind spots seemed more a result of random patterning than imposed meaning. 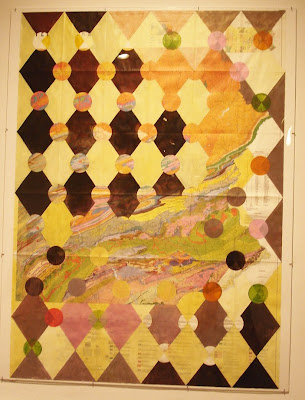 I found the one above and below, "Eastern Pennsylvania" the most interesting as the abstract patterning had concealed the majority of the map and additional colorings of contour lines broke the landscape into little planets. 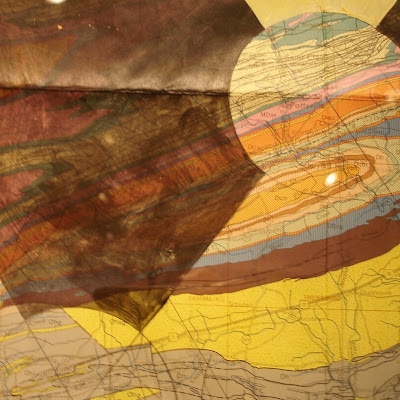 Joyce Kozloff's map imagery was recreated in paint and print with symbolic markings stressed, but with an additional superimposition of biological system imagery. The parallels between macrocosm and microcosm blend body and space in a symbiotic relationship. In "Bodies of Water: Songlines", below, snippets of text sharing quotes of journeys are collaged onto the surface as well. 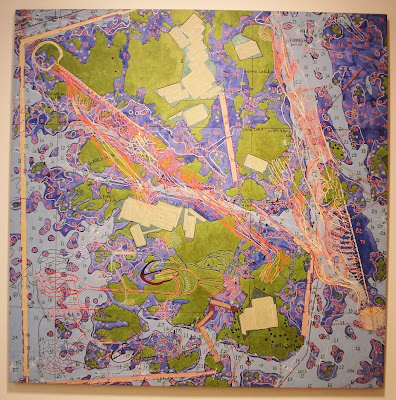 Nikolas Schiller had a series of digitally manipulate aerial photographs. Several were rendered from images of the Gershman Y itself, and a larger piece was titled "Federal Triangle". The manipulations turn the photos into kaleidoscopes and quilt blocks through repetition, and the manmade cities are perfected. Can you imagine living in such awesome symmetry? He has quite a website here. 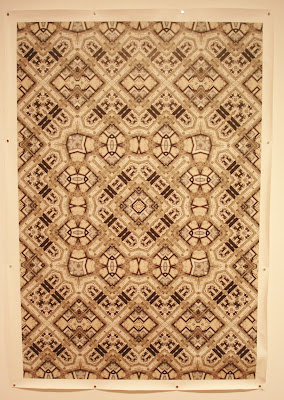 Finally Leila Daw had a series of invented maps of reclaimed land, marked with symbols of long-buried cultures. Her surfaces are resined, creating a sense of preserved artifact or holy icon. More here. 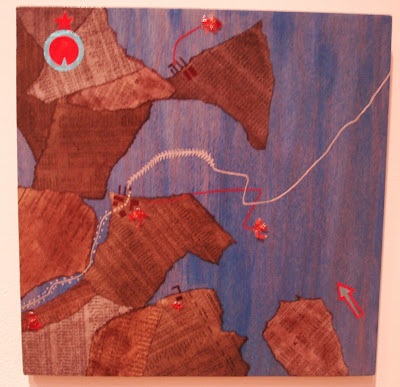 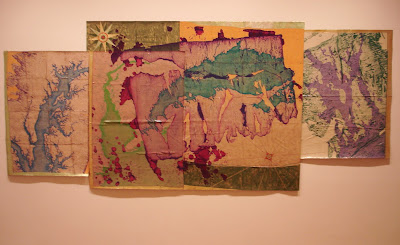 As you can imagine, I was in map heaven. You can be too if you head to the Gershman Y on the corner of Broad and Pine sometime before August 15th, 2010.
Posted by MarieE at 11:04 PM